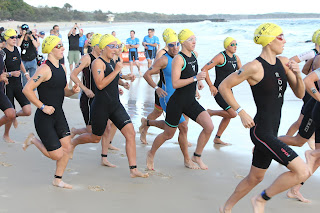 I looked out into the surf and watched the waves churn and roll, crash, then churn and roll again. Supposedly, I signed up for this, along with the 7000 other athletes who stood on the shore with me, questioning their own sanity. These Aussies grew up swimming in this insanity on the daily, and their numbers far exceeded that of my fellow Americans. Nevertheless, I puckered up my American ass and tried to stand tall and confident to the waves. I watched Natalie Van Coevorden scheme and plan her strategy, pointing out toward the buoys. Not until the gun went off did I realize that plan involved running at least 100 meters down the shoreline before we jumped into the water. 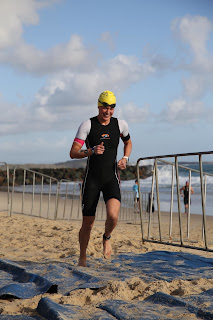 Interesting. I never would have thought to do that, considering my open water swimming experience in ocean rip and waves is virtually non-existent. When confronted with a situation such as this, I have learned to fake it. Pretend I know what I'm doing. I can do it. I can swim with the best of them.

Then I jumped in. To my surprise, as difficult as I found it to swim out to the buoys, I found swimming back to shore the most challenging part of this test. By this point, I knew the head official had changed the course by shortening it, such that after turning around the last turn buoy, we were to simply swim to shore.


Just swim back to shore and run around the yellow buoy.

Right. That's what she said. I felt the rip that others talked about that morning, that ultimately encouraged the shortening of the course (once for the elite then shortened again for the age groupers.) I felt it so strongly that no matter how hard I tried, that damn yellow buoy sure wasn't getting any closer. Somehow those other ladies had managed, though. In fact, I'm fairly confident they had already entered transition before I'd even left the water. What did they do to keep from having waves crash on their backs then drag them under? I kept looking over my shoulders in an attempt to time it just right. Who hasn't seen the successful body surfing strategy to exit the swim? Treat yourself. This definitely was NOT how it went down.


Regardless, I found where the water gave way to sand, and stumbling to my feet, I ran toward that yellow buoy and laughed when volunteers asked me, "Was that hard?" I believe the first words that came to mind were, "Holy fuck, yes," and I may have said that out loud. No, I definitely said that out loud.

Last elite into transition, I tried to shrug off the feeling of ego-bursting demise. This year has given me nothing short of hard lessons and humbling experiences. Yet, I have come to realize, I am experiencing. I am doing exactly what I set out to do. I may not be feeling the way I really wanted to, but had Pilates for Sports not supported my travel to get here and accommodations to stay, I would not have otherwise found myself in one of THE most beautiful places in the world. 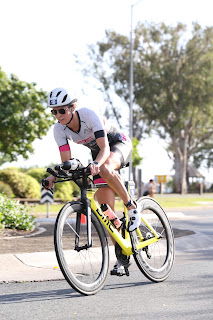 So I rode onward, quickly passing by a woman whose day unfortunately ended with a mechanical problem. I rode alone over clean, clear roads and through too many round-a-bouts to keep accurate count. The excursion up Garmin Hill offered beautiful scenery that, of course, I rode too hard to enjoy on this day, but I know from riding with Luke and Beth of Wyn Republic on the Friday prior that, wow: this place bleeds beauty.

Unlike Friday, I did not happen to spot any kangaroos feasting on the grass in the golf course, but while making my fast descent off the hill just prior to it, I suppose it's possible I might have missed them considering my efforts to stay aero with quick, unproductive glances. It turns out after perusing through race photos by FinisherPix after the race, my movements out of aero might not have mattered considering how un-aero I appear to be anyway. Next year is already full of resolutions, but one of them must involve finding a more competitive position on my bike.

Back to transition, which, by the way, was quite possibly the most well organized area I have ever witnessed in a race, I rode in having picked up two places. Like it really mattered, but at the time, I sheepishly admit it helped stoke some of my competitive fire. I channeled a bit of Stef Hanson's cheeky personality and let the beans she helped me spill the day prior in our Witsup interview strengthen my effort on the run.


All year, I have struggled with a lack of competitive juice coming off the bike. Honestly, no one feels good heading out onto the run, but in my case, I have either started underfed or underfit. Likely, both issues have caused me to feel as though I am slowly dragging my sorry ass along the course by a string, willing it forward with only the thoughts of "just get to the finish line," and "death before DNF" urging me not to quit. I know not what to attribute my change in mindset on this particular run in Noosa, but I am willing to bet it had something to do with the fact that I found myself running in Noosa. How could I not feel happy about the sun baking my skin when sub-freezing temperatures were the reality back home? 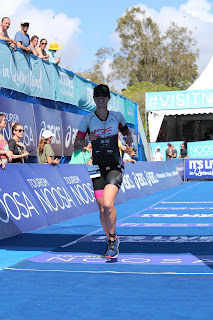 Not my fastest run, but not my slowest one, either, I soaked up the atmosphere and ran myself back into town after running out to the halfway mark on Weyba Road. I noticed the distance between myself and the elite woman in front of me slowly starting to recede, and with just 2 kilometers to go, I had an important decision to make. Can I pass her and hold my pace?

I surged past her with a speed I hoped she couldn't match, and then I grimaced the entire way home. Once over the finish line, I grimaced no more. I smiled. I got way more out of myself than I had planned on this day.

To Pilates for Sports for the opportunity, to Noosa for the show: thank you. Ending my first year as a professional on this note truly was a dream come true. I remember telling Bryan back in March when I entered the Noosa competition for USAT members and subsequently started the Pilates for Sports program, "I'm going to win this thing so we can go back to Noosa." Never did I think I would get a phone call from Noels back in September to share that I had been selected as one of five lucky winners. I am not a lucky person. Until this trip, I would have said I never win anything. However, this experience in Noosa has revealed just how fortunate I am to have experiences like these and to train and race at this level. May I move forward with grace and ambition for great things to come in 2020.