October 26, 2019
When we landed in Shanghai just before 6pm, local time, we did not anticipate another hour and a
half of driving to our destination on Chongming Island. Exhausted and hungry, we seemed to accept the news with relative ease on account of gratitude that all our luggage and bikes had arrived unscathed. Driving for as long as we did through the dark in unknown territory, it felt slightly unnerving when the driver started to slow as we approached the hotel. I got the impression this hotel was situated off the beaten path, and when we awoke the next morning to look out our window, my suspicion was confirmed.

A look outside our window revealed an orchard down below, and a walk outside the front door revealed a large sanctuary for birds and two large fish ponds. I marveled at the blue sky above and the sunshine that reached me down below. Two of these features we did not experience in Xi'an, and how grateful I felt to witness them so soon into this second adventure. 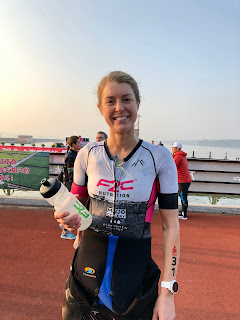 While this race venue had more scenery to admire, it lacked the food we "enjoyed" in Xi'an. (When I say "enjoyed," I mean to say the morning and evening dining options left much to be desired when compared to those we experienced in Xi'an. However, it seems my stomach doesn't tolerate anything Chinese, so "enjoyed" is used sparingly in this context.) I survived on organic freeze dried meals by Mary Janes Farm. So while the menu offerings from the hotel included old duck soup, streaky pork, and fried rice, I enjoyed red pesto pasta, black beans and rice, and bare burrito meals.

No weather snafus threatened our race day experience this time. We awoke to clear skies and sunshine, and having perused the swim start, transition area, and run course the day prior, I knew a great day was in store. Another beautiful venue, the swim took place in a freshwater lake, around which we ran three times on a flat, smooth path to conclude our race. I have learned that when racing in Asia, the bike course is completely blocked off to motorized traffic. If you have witnessed the driving that takes place here, you would appreciate the safety afforded you by not having to dodge cars and scooters driving in all kinds of directions. 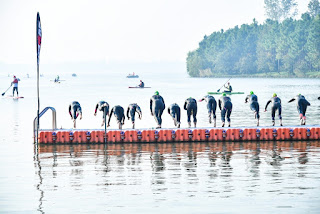 Diving off a pontoon created another first experience for my newbie self. I have practiced such starts before, but the fear that my goggles would fly off still planted a seed of doubt within me. It turns out, the goggles held fast, and I had one of my best swims, to date. I swam between front and chase packs, hoping someone would sweep me up so I wouldn't have to swim alone. No such luck, but I'll accept my sub-30 minute swim and optimistically hope that, had I had feet and other bodies with whom to swim, I might have posted a faster time. 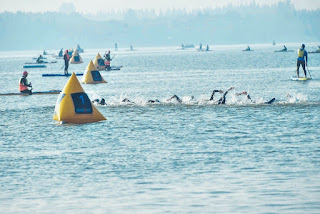 Until then, I appreciate my ability to envision and execute my transition from swim to bike, but next year I think I'll feel #morepro when I learn to mount my bike on the fly (or, at least keep my shoes clipped in on my bike and work to get them on while on the fly). Nothing looks and feels more amateur than clogging through transition, even though the grassy surface really was a perk.

On the bike, I chased roads so smooth you would think they had been paved yesterday. What should have been a fast ride, however, turned into a slog. The odd back pain that cropped up several days before seemed especially aggravated by positioning myself in aero. For the first time ever, my left butt cheek seized up, and the tightness seemed to radiate both directions: into my low back and down my leg. Remembering Rinny's account of her experience in Kona this past year, I wondered if this was what she felt before she pulled off after 112 miles of riding. I reminded myself that I had only ridden 20 miles at this point, so, probably not and to get back into the ride.

A two-loop course provided me the opportunity to pull out at a convenient place near the finish line. I talked out loud to myself, as if doing so would make it all the more concrete and definite. When I shared my plan with God, that I was going to pull off to the right just 100 feet ahead, I watched my exit fly by as my legs kept spinning, wondering why I still found myself on the motorway, riding as though I intended to start the second loop. Shit, dude. That's not funny. 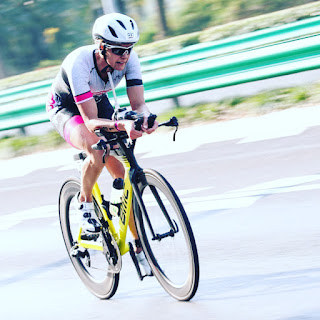 Ok, fine. I'll ride to the next aid station, but that's IT. Back seizing, butt aching, chest wheezing, I huffed it back out onto the highway and rode at such an embarrassingly low wattage that, if this had been any other day, I would have thought this an easy, aerobic ride. Perception is everything, though, and with each person I passed as a result of me being on my second lap while other age group athletes just starting their first, it felt like I had grown wings and suddenly started flying. I flew by that aid station and the one after it, and then I soared through two turn-arounds before making the right turn back into the park for T2.

Optimistic that standing upright might mitigate the irritation in my back, I racked my flashy BMC Timemachine and galloped over to the change tents after nabbing my bag. I set off on the run only to have the bottom of my left foot start to cramp before even having reach the 1k mark. My physical therapist self spoke in the back of my head, having now confirmed the L5 nerve root was the culprit. My competitor self spoke next, wondering why I had been made to get through the ride only to crash so quickly into the run. My stubborn self spoke lastly, reminding me that while I obviously did not have the capacity to run the way I had hoped I would, I still had plenty of slower gears I could use to get through the first loop of the run, at least.

While the perception of speed helped get me through the second loop of the bike ride, the continued movement forward into the run seemed to alleviate the tightness in my foot. Soon, the tightness completely abated and instead, my foot felt numb by the end of the first loop. Because I could still run, I aimed for the corral that led me on to the second loop. With a completely numb foot, I ran back around the lake so I could start my third loop. I'm a complete glutton for punishment.

By the end of the third loop, making my way to the finish line, I literally felt I had nothing left. I doubt this is what it feels like when people use the term to "go to the well," as I feel that distinction is really only appropriate for those who are racing so hard and fast and well that they race on fumes alone. Seriously, this feeling of complete misery has plagued me one too many times this year, but if this is the lesson I am to learn, then rest assured, I have learned that I can hurt. A lot. Often.

I saw the line and crossed it, but if you had blindfolded me, I could not have known if I ran on red carpet or asphalt. The adrenaline kept my numb feet moving, but it started to wear off shortly after I stopped. I sat down with prickly feet to digest the way that race had unfolded, recognizing that up until this year, I have valued quality performances and putting my best effort into each one. Unfortunately, my best performances have not been ones of fast times this season, but instead, have concluded as ones of strong, mental fortitude.

At this rate, I think I can safely say I have developed into a more patient, resilient person. I wait for a breakthrough, and I look forward to completely surmounting past injury so that I can start diving into harder, quality sessions. May great opportunity await in 2020, but first, the Noosa Triathlon.