Skip to main content
October 10, 2017
"No discipline is enjoyable while it is happening--it's painful. Yet afterward, there exists a peaceful harvest of right living for those who are trained in this way." Hebrews 12:11

I find myself at the end of this season, dissatisfied with the outcome, but discontent with the thought of making excuses. It took every day of nearly seven weeks to heal, rehabilitate, and bounce back into my training routine after my bike accident, and I think I managed better than I subsequently bounced off the the brick wall of an elevator shaft in Coeur d'Alene. Some mornings, I imagine I have fast forwarded into my 60s when I wake up as stiff and immobile as a log. Unfortunately, I'm quickly reminded by my 50-something husband that, in reality, I have absolutely no idea what I'm talking about. (One of the disadvantages of marrying someone older and "wiser.")

It has also occurred to me how letting a race report go unwritten for a race that took place over a month ago suddenly makes the effort itself seem pointless. By this time, who cares? In fact, we all have the Ironman World Championships in Kona to focus on, now. Yet I suppose that fact alone spurs me to finish this last post for what amounted to the last race of this season. Because I have let this go so long, I'm going to include what I started 4 weeks ago without changing the reference of time. In the meantime, I'd rather move forward and work on the next update, which seems far more interesting to me now.

So, we arrived in Chattanooga, Tennessee two weeks ago for the Ironman 70.3 World Championships, and after two days of enjoying the clean air and scenery, I started sneezing. What started as denial quickly turned into dread. You see, I'd returned from a run on Thursday afternoon and, curious to know what the "lilac of the east" (aka crape myrtle) smelled like, I dunked my nose into one of the white flowers of a bush standing robustly in our homestay's yard. Initially unimpressed with the smell, as I didn't find it nearly as strong as our own lilacs of the west, my sniffer scented the sweet aroma that, indeed, resembled that of what I am so accustomed.

Not five minutes later, upon returning inside our small basement apartment, I sneezed. Then I sneezed again. Almost instantly, the flood gates of my sinuses openned and made me a far more snotty person than what I already normally am. Cue the tissues and the Benadryl. Yet I didn't have any allergy medications, not even the regular allergy medication I take daily like a vitamin. My pharmacist of a husband suddenly felt responsible to take me down to the local Walgreens and find me the Sudafed and Benadryl. This would not be our only trip, mind you. 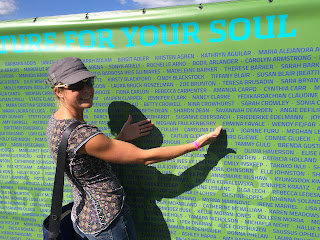 Friday rolled around and I developed a nagging cough. Mentally, I told myself it couldn't be a cold because I didn't feel bad. So, another trip to the local Walgreens (told you) after driving the bike course had me walking out with Mucinex in hand. Problem solved, or so I thought.

Saturday morning (damn it, race morning), and I awoke to my 0500 alarm, eyes wide open, literally afraid for the day. Never have I felt so much uncertainty. In my dreams that night leading up to my 0500 wake up call, I'd envisioned waking up on this morning and throwing in the towel. How would it feel to watch from the sidelines after spending so much money and effort to get here? I decided I likely would not live with myself very well afterward, especially given the fact I'd already not finished Whistler 70.3 six weeks prior. I couldn't stomach two failed races in a row. That, and I did not want Bryan to come away with the benefit of having raced the next day and me flying back to Spokane with nothing to show for my race day.

Bryan instructed me to hop in the shower; perhaps some warm water and steam might flush out the sinuses and clear my head. Yet sitting at the race start and waiting for my ninth wave to go off nearly an hour and a half after the professional woman had jumped off the dock, did not help my head anymore than the shower did.

It turns out, nothing really helped make my race day what I had originally planned on making it. I coughed and sputtered my way mostly upstream for the swim, grateful for my wetsuit and the last 400 meters of downstream current to the finish because my arms had literally died with the effort of keeping me afloat. I snot-rocketed my way up Lookout Mountain, nearly certain that once at the top of the hill, I'd fall over. If the spectators along the course had not made such the valiant effort to cheer us onward and upward as they did, giving me the feeling I had found myself riding in the Tour de France, I likely would have thrown in the towel (or my ever disgusting, booger-laden Kleenex, in this case). 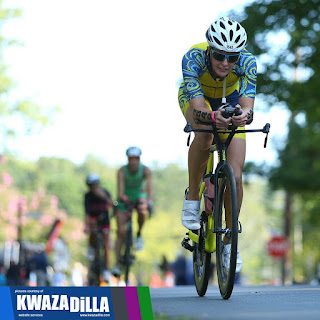 By the time I'd found the second transition, the day had long progressed into a time when temperatures escalate and the sun rests in the middle of the sky. Having survived the ride of 56 miles with F2C glycodurance likely providing me the only energy my body ever had, I started out on my feet with the determination to somehow finish the run.

I did not feel good. Every footfall resulted in a sharp jab up through my stomach and shoulders. I looked down at myself, wanting to feel strong in my new custom kit by Peaks Apparel. It sure looked and felt better than I did, but all I could muster more closely resembled an Ironman crawl rather than the quick clip I'd experienced in Coeur d'Alene. So, I slogged over every hill they found in Chattanooga and strategically placed in this world championship course. Spectators lined nearly every inch of pavement, with larger crowds lining the bridges and turnaround points. Bryan found me at multiple sites along the way, obviously holding back updates as to my progress now that it was apparent it did not matter anymore.

Looking at pictures of me taken from the race, it really does appear that I nearly rolled my way through the course. Arms flailing, torso twisting, and face contorting, I used every bit of my body to get my legs to do what normally feels effortless. I realized I have so much more wrong with my running form and lack of strength that the enormity of my significant muscle imbalances made my cold seem trivial. Despite the mess of myself, I felt relieved I decided to show up under the circumstances and make a showing at this year's race in Chattanooga, as the efforts the city made to make this feel like a big deal really showed through.

With much relief, I move on to scraping every ounce of sunshine and suitably warm temperatures out of the remaining days of October and November (hopefully). Two of my greatest struggles this past year involved limping my way through with a high hamstring strain and subsequently struggling to perform (I mean, pedal) my bike. I have ignored the urge to sign up for fall running races and instead, I use what remaining motivation I have to utilize physical therapy and spend as much time in my saddle as my sore butt can handle. Optimism propels me into the next year, the year I reacquaint myself with Ironman 140.6.