June 07, 2017
After three consecutive years of ferrying up to Sidney and driving south into Saanich and Victoria for this Ironman 70.3, Bryan and I have decided this race will mark the last Victoria experience we have for awhile. Yes, the scenery, sites, greenery, and significant agricultural lure continue to interest me, but the population growth, horrendous traffic, and deteriorating roads do not. We marveled at the changes that took place in just three years.

For the race this year, race directors moved the start and finish back to the north end of Elk Lake. This allowed for an improved swim, both because of cleaner waters and a more accurate swim course distance. They also maintained the single loop of cycling, which traversed all types of roads and took us through nearly every type of environment this small peninsula of British Columbia has to offer. I appreciated the scenery of this course with the stretches of thick, lush forests that enveloped the road. Finally, the run continued to follow the 10k path comprised of gravel, dirt, and a short stretch of asphalt. This year, we ran in a counter clockwise direction, which is what we did the first year, in 2015. 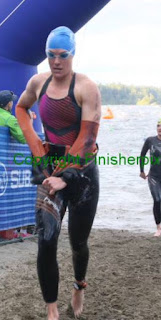 This race has developed in the past three years, also. We noticed many of the mistakes made in the first and second years have disappeared, and race directors have improved the pre race experience just as much as that of the overall race experience itself. However, parking continues to hamper much of the pre race process, despite their efforts to use shuttles as a mode of convenience. Upon arriving at Hamsterly Beach race morning, a long line extending from the transition entrance had us shaking our heads, too. Body marking should never establish itself just outside the entrance of transition.


Regardless, we made fast time setting up and walked down to the swim start. The corrals that forced athletes to cozy up far too close last year in our efforts to self seed into a rolling start position had widened this year. The extra accommodation allowed us all to position ourselves appropriately to enter the water when we wanted to. Seeding myself in the under 30 minutes section allowed me to actually, for the first time ever, swim a true 1.2 mile course in 28:13. For this reason, I know I'm now a firm advocate for the rolling start format rather than the wave start. Nine times out of ten, my wave start has screwed me. Trying to swim my way through schools of people who swim far slower than me has never seemed fair. With the rolling start, I actually had the opportunity to swim with people like me, and this time, I actually swam with the same people the entire swim, shifting positions no more than three to four times. 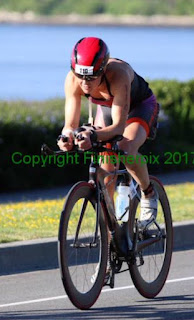 Out of the water, I struggled on the bike. Frustration overwhelmed me because of the way I felt coming out of the water. Regardless of the slightly uphill nature of the first 5 miles, my poor power output throughout the duration of the bike ride made me repeat the mantra, "Don't be complacent," when each cyclist passed me. My head kept telling me to push harder, but my legs seemed to have not gotten the memo. I dropped two places on the bike, and the 8 minutes I needed to make up to remain competitive in my age group haunted me during the run. 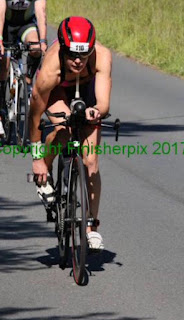 Despite the slightly hillier bike course this year that proved more challenging than in years past, I seemed fresh for the run. I remember thinking in the middle of the bike ride how badly I wanted to flop off my bike once in transition and embrace the race activity from the sidelines by forgoing the run altogether. I felt that bad. I learned a valuable lesson, though: just giving it a try.

Perhaps I ran angry. I likely ran determined. Within the first kilometer, I encountered Kendra Goffredo, a professional woman I'd had the pleasure to meet last year in Coeur d'Alene. We'd ran together for a bit there before she drew away from me on our way to the finish line. Here, it appeared I had the opportunity to return the favor, seeing as though I felt terrific. She thanked me for my presence on this lonely stretch of the course, and we continued to run together until the fifth kilometer or so, when I started to pull away in my efforts to find the two other women I knew of in my age group who had passed me on the bike.

By the end of the first lap, I had not found them. I started into the second lap wondering how long this feeling of invincibility would last. By this time, other slower runners had entered the course for their first lap. It took some effort to fly over roots and rocks and through slower people. I felt compelled to stop and make sure one girl I'd just passed felt okay after she tripped and fell over a rock. I exchanged patient words with a loose dog its owner obviously thought would not be a problem despite the race taking place on the same trail.

I ran up the hill at miles 5 and 11 for the last time. Here, I realized I'd actually made substantial ground on the two women in my age group as they ran down the hill when I ran up it. I had 2 kilometers to overtake them, and I decided that yes, I really wanted that satisfaction.

With one kilometer to the finish, I passed them both. Most notably, however, I ran my fastest run split to date, in a time just shy of 1:32. My mixed feelings after this race stem from the fact my two break through performances in the swim and on the run were not enough to overcome my poor performance on the bike. In addition, I realized the downside to a rolling start when, despite crossing the finish line  as the third woman in my age group, I ended up in 4th place. I don't think the satisfaction of passing both those ladies on the run will be tainted by the seconds that inevitably deprived me of third place, though. I remind myself to embrace the small victories that ultimately mean I'm making progress toward my bigger goals. The big picture alludes me sometimes, but generally, I find myself filled with excitement for the potential I have not yet
discovered.