Even before this race began on what happened to be a relatively calm, Saturday race morning, I
struggled mentally. After a meaningful conversation with my coach Friday night over the phone, I sat down and wrote out 10 goals that I planned to use to keep myself focused on each part of the race. Because I'm currently reading Joanna Zeiger's book, The Champion's Mindset, and because I just finished the part of her book emphasizing the ways athletes can benefit from writing goals, I felt inspired to do it myself.

My goals fell into one of three categories related to procedure, performance, and outcome.

I wrote these goals because I felt uncertain about my physical preparedness leading up to this race, and I needed something else to focus on when I knew I'd feel terrible. In retrospect, it seems paying better attention to achieving procedural goals allowed me to better pick apart the race and work toward smaller challenges rather than get bogged down by the entirety of the race itself. In addition, it required more effort to concentrate on accomplishing the procedural goals because, instead of focusing on my performance and the ultimate outcome, I needed to take care of the feedback I got from my body by taking constant inventory of all my working parts.

I think back to the swim in the 64 degree Fahrenheit waters of Sand Hollow Reservoir. Because of the high wind advisory for later in the afternoon, course directors had opted to cut the time between swim waves short by about 2 minutes. While this meant more traffic for me to swim through as a result of starting in one of the last waves, my efforts to glide through the water and focus on my timing brought me back to shore in a time of 29:55. Positively speaking, it also meant I hopped on my bike and rode out of transition about 20 minutes sooner than had previously been possible with the initial wave schedule.

Once on the bike, despite finding one climb after another almost immediately after leaving transition, I remember thinking to myself throughout the duration how grateful I felt for overcast skies and the winds at my back. I noticed how my fellow competitors took my mind off the course by cracking jokes. Surprisingly, those around me actually followed the drafting rules. By the time I found the 40-mile marker, I realized that, despite my low back and hind quarters registering more than "moderately fatigued" on my internal pain scale, I felt well primed to start the 4-mile climb up Snow Canyon. I remembered this section as my favorite part of the race. It served as an opportunity to exude strength and courage when others around me loathed the crawl up 4% of hill (at least that is what I thought to myself.) Bryan and I had told each other during the drive up it two days before that, from gate to gate, it required about 20 minutes of effort before we could celebrate with 11 miles of downhill to the finish line.

Celebrate, I did. The descent back into transition left me with a bike split a little over a minute slower than 4 years ago, but I will not loathe the result when, upon racking my bike and donning my Hokas, I did not experience the same cramping quad pain I did the last time I escaped this transition area.

In fact, imagine how surprised I felt when my internal "check engine light" I thought for the past 2 months in training would most definitely come on, did not. No pain in my butt, my hamstring, nor my calf. The discomfort the sun radiated upon me did, however, took a considerable amount of wherewithal to ignore. I made the conscious decision to change the screen on my Garmin from current pace to time to prevent me from feeling discouraged when my pace didn't reflect the gut-wrenching effort I was sure to feel.

Upon embarking upon the first significant climb from Diagonal Street, professional woman Jeanni Seymour rushed down the hill, the muscles in her quadriceps bulging out distinctly from under her skin. The concentration on her face gave me courage, and I found myself passing the only woman in my age group who had beat me out of transition. Once I had crested the hill, I found Bryan at mile 3. We exchanged a few words before the distance between us grew to discourage continued conversation, and instead, a more determined focus on my present state of competition ensued. 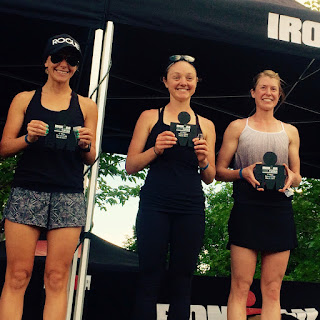 I heard my footfalls. I felt my arms swinging in time with my churning legs. I counted my steps, one to one hundred, to keep my mind off the sun burning my neck. I rewarded my efforts with a short walk through every other aide station to replenish the ice I shoved down my tri-top. I drank as much water as a 15 to 20 second walk would allow. Though I heard the alerts from my Garmin registering every mile covered, I never looked at it. My pace did not matter. What I saw, what I felt, what I chose to think about, did. As a result, I look back fondly on that run. My body felt stronger with each person I passed. I smiled when the expressions I saw on peoples' faces needed encouragement. I thanked every volunteer and morale-boosting spectator. 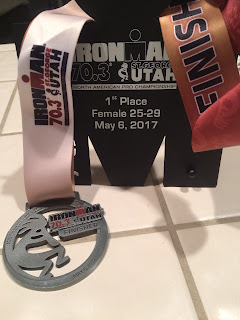 In the end, even my cramping right calf that inevitably altered my gait by involuntarily curling my toes could not keep me from running down the finishing chute. Having completely lost all control of my running form, I ambled down the carpet like a monkey: arms flailing haphazardly, hips swaying, knees buckling, and toes curling. I have yet to perfect the iconic, strong, Ironman finish line running stature. Yet in that moment, finishing the run 5 minutes faster than in 2013, a run I once thought two months ago would keep me from competing in this race altogether, felt like enough.

The greatest lessons I learned in all of this? Use my head. Speak and think positively. Exude confidence. The course is only as difficult as I make it; break it down and build into it. Competitive effort is supposed to hurt. Focus on achieving goals rather than what the clock says. Find gratitude in all aspects of my current status, predicament, and endeavor. Greatness will happen. Let it.