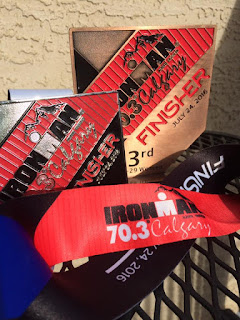 I sat in my doctor's office, eleven days out from race day, concerned about general malaise and a
nagging cough. My head told me my chance of racing Calgary 70.3 would be slim to none, but I hoped my doctor might think to prescribe me something that could cut the recovery time down significantly. I walked out with a perscription for an antibiotic and prayed to God that perhaps this would quell my acute bronchitis and keep it from manifesting into something bigger and more disabling.

Naturally, I wanted to push my luck when I felt better three days later. Again, I credit my coach for encouraging me to take the time to heal. Derek even tried to distract me with recipes for chicken soup and ginger teas. I made both. Thankfully, I recovered soon enough that I didn't have to attempt his third suggestion, which involved sitting under a sheet in my bathtub, naked, soaking in the steam from a pot of boiling water with healing herbs. Believe me, I would have done it. This time, however, western medicine sufficed.

Fast forward to today, and I no longer had a cough, nor any ill-effects from the bacterial infection I'd caught from a patient of mine at work. In fact, I came into the race feeling giddy because I'd overcome what I thought two weeks ago to be a serious buzz kill. Short of some muscle imbalances that have wrecked havoc on my hips since Coeur d'Alene 70.3 three weeks ago, I felt fresh and ready to race.

Today's swim felt fast, as I'd raced off the beach in an effort to beat the majority of my wave of  women to the first buoy, which involved a 90 degree turn within the first 200 yards. From then onward, I stayed with a group of about four women, primarily tasting their bubbles and keeping tabs on their toes. I came out in just under 29 minutes, which, for a true 1.2 mile swim, would have made my day right there. Yet today's swim was posted as just 1750m. (Meh)

Wetsuit stripped and folded into my swim bag, I ran into T1 and donned my shoes and helmet before heading out of the tennis courts. Once on my Quintana Roo, I embarked on a bike ride where highway conditions, once again, left me completely nervous. The race director stated at the athlete briefing that street sweepers would be out Saturday afternoon, and then again on Sunday morning. Either he flat out lied or he sent them to the wrong roads. Gravel, a dead rabbit, dog poop, sticks, firewood, metal, and trash littered the shoulder that we were confined to use. The cones they'd placed to keep cars and bikes separate actually made for a more treacherous experience, especially when trying to pass people. Combined with the rumble strips, I once again question the sanity of race directors that don't provide a lane for athletes to use. I felt confident in my logic when I happened upon an athlete 5 miles from T2, sprawled out on the asphalt with his bike 5 yards away. He'd been clipped by a car. Not 5 minutes later as I rode away, an ambulance drove toward the scene to assist him.

This bike ride felt hard going out on Highway 22X. The course map denotes a general elevation gain until about half way through, and I felt every foot of it. We also fought a headwind today. Not until turning onto Highway 22X North and passing Bragg Creek did I feel like a legitimate cyclist. Like, a fast cyclist. Just over 2 and a half hours had elapsed before I rolled into T2. The race director stated volunteers would help to get our bags and rack our bikes; I didn't have the luxury of either kind of assistance. Though I found my bag without any issues and took my time donning my Hokas and sunglasses because I wanted to run out onto the course and feel composed, not rushed. Seeing the other women around me, though, and knowing that at least one other girl in my age group had run herself onto the course before me, I couldn't help but do my best to zip out of there quickly.

Danielle Evans cheered me out onto the run, and I can remember the first 2 kilometers thinking how great my legs felt and how light on my feet my Hokas made me feel. Like I mentioned previously, my running this year has been compromised significantly by muscle imbalances, particularly in my glutes, which has caused a number of niggles and pains down into my knees and shins. As a physical therapist, I kick myself to have let my strength deficits get so out of control. It appears this year I'm paying the price. So to come out of transition and feel somewhat decent made me think that all I needed to do was stick to my game plan: start conservative. By conservative, I didn't mean looking down at my Garmin to see I'd run my first mile in 6:43 minutes. On the bright side, I had overtaken one female competitor that had beat me into T2.

By mile 3, I felt I'd found my groove at what I'd hoped to be 7min/mile pace. It wasn't until I made the turn around at just over 10k and embarked upon mile 8 that I needed a swift kick in the butt. My pace was slowing significantly. I took in a gel and made sure I drank some water, but I seemed to be melting into the asphalt. In among the beautiful trees and shade that they created, I kept thinking this should feel more enjoyable. Such beautiful scenery enticed us as we ran through the woods and had the water to look out upon with sailboats dotting the horizon. I prayed to God for some kind of boost to get me going and that it didn't involve another woman passing me. I already had enough to contend with today.

At mile 9, I looked up to see what I thought to be a woman in front of me. Because of my competitive nature, I sped up (barely) in an effort to get a better look. Sure enough, my prayer had been answered. There, just 20 yards away, ran the girl I'd remembered passing me on the bike whose left calf showed the number 26. My opportunity to move up a ranking in my age group ran just ahead of me. I'll be damned if my pace didn't improve, even by a few seconds.

Calgary's run course proved to be a challenge. Not only does it boast some pretty significant hills, but it is also relatively exposed. Today's clear skies made for a warm run that even the scenery couldn't hide. In addition, you find yourself totally baffled that after climbing that last hill and thinking you're approaching the finish line, you really have only run about 18k. That means another 3k remain. That's about 2 miles for my American brain. In these last two miles, I felt thankful I'd run (hobbled, but not walked) up that hill because once at the top, I had nothing left. My goal pace suddenly deserted me and a remarkably slower pace set the tone for my final death march to the finish line. My mantra? Finish looking like a winner.  Then, I did what I'd been trying to hold back until I could find a porta potty after the race. I peed my pants. Nicely done, Meghan, a true winner you look right here.

Regardless, I chided to the 20km marker how much I enjoyed seeing it, and then I hobbled that last, painful stretch into the finisher chute, thinking to myself just how long that 1km felt. Once across the line, I learned I'd run myself into 3rd place in my division. All three of us took the overall amateur placings from second to fourth. Make this the third race this year where the top female amateurs come from my age group. It serves as a reminder that such great competition should not discourage me, but motivate me to keep working hard in an effort to make gains and tackle goals. I'd feel race bored if the results were easily obtained and predictable.

And so, I am thankful for another race completed, some significant lessons learned, and some more fuel for my fire to push myself to train and race as a legitimate competitor. First, I look forward to tomorrow's rest day and Wednesday's massage at Elements at Wandermere.