August 11, 2015
Before I started putting words onto this clean piece of electronic printer paper, I found the blog post I'd written 3 years ago that detailed my race experience at that Scenic Challenge in Coeur d' Alene. Not only did I enjoy learning I'd bested my time from 2012 and later in 2013, but I also remember how creative I used to write when it came to blog posts and race reports.

Now that it's 2015, I'm happy to report that after three attempts, I successfully PR'd the Scenic Challenge by a little over 4 minutes from 2013, and finally, won. Unfortunately, I don't think my creative writing has improved nearly as much as my level of fitness has. Nevertheless, I feel lucky to have had a day that I not only could challenge myself to conquer some of my prior bests, but I could also relish those cheers from spectators calling out my name as I made that final run through the park to the finish line.

Upon arriving to the park, I remember back in 2012 and '13 thinking just how far those buoys looked, floating out in the water. This year, the distance to the buoys didn't look nearly as irritating as the choppy surface of the water. I swear this lake's water surface is not dictated by the winds, but instead by some underwater motor. Despite the thoughts running through my head, the choppy water only seemed a nuisance getting out to the first yellow buoy. After that, I could feel the surges of waves helping me to the last yellow buoy and finally, pushing me to shore. 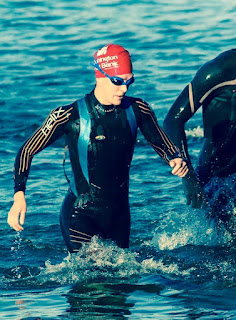 Exiting the water as third woman, I immediately felt at home with everyone's cheers. How wonderful to race where people know you. Even leaving transition on my Quintana Roo, a few people called my name before I made that turn onto Sherman Avenue. How I love this city!

I watched my power numbers stay relatively consistent around 190 to 200 watts. I knew that upon making the turnaround at Higgins point, they would soon escalate. It didn't take me lone to catch the two girls who had beaten me out of the water. I prayed for safety and composure as I ascended "the hill."

When I reached the top, I realized how thankful I was for what just two more years of experience will do for you. Instead of feeling like that hill had beat me, I felt like I'd managed to successfully pace myself so that the hills that followed didn't seem nearly as terrible as they had two years ago. In fact, coming down the hill on Sunnyside road, I realized I had just a mere 5 more miles to go. 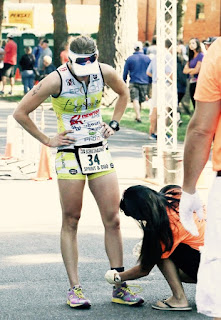 Reaching transition, my power numbers had surely reflected the increased effort I'd put forth on those hills. Yet now, I needed to focus on getting out of transition as fast as my Newtons would let me. The priority to put more time between myself and the next few ladies made my steps quicken. My Garmin reflected a pace I can only one day dream of running, so I slowed down to a pace I'd planned on last night. While a 6:25 min / mile pace didn't feel wonderful, it's one that I only knew I could push thanks to the 40 minute build my coach, Derek Garcia, had had me do just two days ago. Despite wondering then about how that workout would affect my race, I found myself thanking him at mile 5 of the run when I realized I had just a mile to go on what felt like tired, but capable, legs.

I approached the park, running down the trail with the waters of the lake splashing against the shore. How welcoming it felt to hear people cheering for me, many of them shouting my name even though my bib number displayed nothing but my number. Again, I felt grateful for the opportunity to find another win. This time, among friends.

Finishing in a time of 2:17:01, perhaps I felt most proud of my bike and run splits. What seemed so difficult two years ago felt challenging, but entertaining, today. Hopefully, this race will continue next year despite the advent of the CDA 70.3. My conversation with the Race director, Scott Ward, left me motivated to do a better job of supporting these smaller, local events. While we all have our criticisms  and dislikes of certain aspects of an event (the price, the awards, the quality of the roads, the post race food, whatever), we should not take for granted the hard work that goes into putting on events like this in the first place. At the end of the day, we all appreciate the opportunity to race. So let's race. 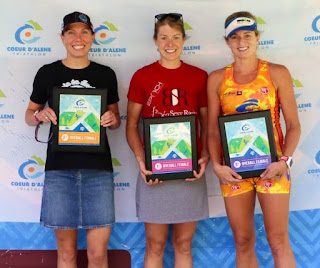