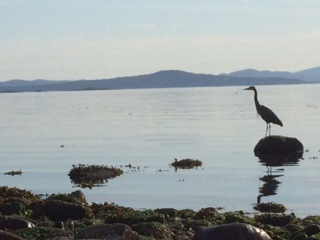 I looked out over the pristine waters of Elk Lake. Up until this point, Vancouver Island had fulfilled all my expectations as far as scenery was concerned. Never have I felt so engulfed by agricultural beauty in the way of abundant nurseries, greenhouses, and road-side farms and shops. Yet just a short drive and / or walk, and I could look out over the waters of the ocean.

As part of the 5th wave to enter the 73-degree waters of Elk Lake, I felt confident in my ability to sprint toward the front of my wave in an effort to find space. I did, but I also found waves 4 and 3. It seemed my effort to stick to the buoy line was one of insurmountable proportions. In fact, by the time I'd made the second turn to the shore, it proved impossible. I could see my swim time lengthening, but like Coach Derek reminded me the day before, I needed to stay in the present. In an effort to do that, I thought my breathing and strength of my strokes would keep my mind busy. 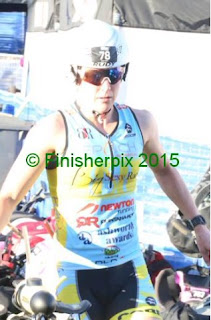 My transition out to the bike course seemed rather smooth. Having no transition bags to deal with, athletes were instructed to lay out their gear on the grassy ground. I thought it ideal given some of the transition areas I've encountered. However, I found it difficult to find space given the way they had crammed us in the racks.

This bike loop consisted of two approximate 43km loops. The roads felt smooth under the whirring of my Reynolds race wheels and Quintana Roo Cdo.1. The course presented many rolling hills, which I felt arose pretty much throughout the entire course. However, I would say most of the rollers are loaded toward the first part of each loop.

I found myself in several predicaments while on the bike. First, the course is open to traffic in both directions. While coming down a hill full throttle, I had about a 2 foot gap between the gravel shoulder and the car that had come to a complete stop in my lane in an effort to make a left hand turn. (Enter "Jesus save me" talk here). Second, I found myself "dancing" with many of the same riders (aka groups of us) during much of the ride. Perhaps this was the result more of the terrain rather than the fact that it was a two loop course, yet it still resulted in a warning by the official despite my efforts to distinctly make a pass and fall off other riders who'd passed me. Finally, I shouldn't have made it around a sharp turn that, because of oncoming traffic, was made very narrow. My efforts to avoid a pot hole, a slower rider still on her first loop, and a cone resulted in me missing first and second said obstacles, but hitting the third. I can't exactly tell you how I stayed on my bike despite it wobbling ferociously, but I'm thinking that after my first "Jesus save me" prayer, He really did think I needed divine intervention.

The scenery on this course rivaled others I've witnessed. This must be the mecca of gardeners because it doesn't take much looking to find a greenhouse, a farm, or a roadside produce stand. There were times I couldn't remember where I was; Concord, Massachusetts, Lake Stevens, Washington, and Whistler, British Columbia kept playing across my mind. Regardless, the only thing "keeping me in the moment" was my power meter. This race, I think I did a better job of keeping my wattage consistently right on target than I did at Troika two weeks ago.

Coming into transition, I knew two other ladies followed closely. We'd been toggling positions for the entirety of the second loop, it seemed. Despite making it out of transition first, Alicia Hill showed me why she's feared in the Northwest by blowing by me at a quick clip around the first kilometer. You can imagine how this felt when I combined this circumstance with the fact I'd forgotten to grab my run nutrition, which sat back in transition. Again, I stayed in each moment by watching my pace hover around 6:45min/mile to 7:00min/mile pace. Also, by counting off each kilometer as I passed the signs denoting them.

Trees created shade for about 98% of this course. Combined with the early start time, it made for a comfortable run. Unless you don't like running on gravel. There exists only one, perhaps 1/4 mile stretch, of pavement. The rest involved fairly well-packed gravel, with roots and rocks here and there. I don't care that people claim it's flat. It wasn't. However, I've raced hillier courses, and the elevation gain in this run is made up of primarily short, rolling hills and false flats. I'm pretty sure that if you count each kilometer, you'll never notice all the hills. I did, however, notice the sprint runners who, by that time, had reached the turnaround and were running against us heading out on our first loop of the half race. This trail pretty much can be classified as a single track trail. Given the roots, rocks, and women with strollers (the course was also open to the public), I felt too crammed and thought if nothing else, the race directors were asking for trouble. 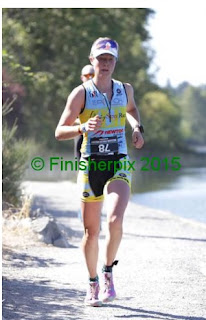 Like I said before, I'd forgotten my nutrition, which made me rely entirely on coke and water at each aid station. I never felt I needed ice despite volunteers providing it. Lastly, I never caught Alicia. Despite gaining a little time on her, evidenced by my ability to keep track of her from a shorter distance, I never could catch her. I was, however, able to watch her finish just 6 seconds ahead of me. Perfect. Yet another close (too close) finish.

Nevertheless, we pushed each other to the point of complete exhaustion, both falling to the ground after the finish line and later seeking refuge in the massage tent. I'm happy to have met the lady, and I'm thankful for such phenomenal competition in these past three races. I give them some credit for my last PRs.


Finishing second in my age group, third amateur, and fourth female overall, I somehow managed to PR my half Ironman distance again by besting my Troika time by 7 seconds. I'm happy with that, considering I found more hills on this course. I felt very strong on my Quintana Roo, and for that, I am thankful. Embarking on my run, I didn't know how I'd finish without my nutrition, but somehow I felt "better" than I anticipated in my Newtons (can someone say, "Hello!") Finally, I'm enthralled by the artwork on my medal around my neck, created by Ashworth Awards. Well done. Next up, Muncie 70.3 (aka holy hot deathtrap). But first, a ferry ride awaits me! 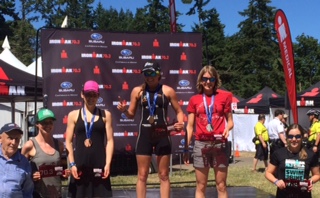