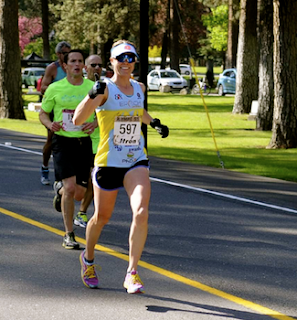 I had one of those days last Sunday where everything felt good and nothing could hold me back. Yet I went into Bloomsday uncertain about how I'd handle such a difficult course when I considered the fact that I'd pushed myself through a challenging brick workout the day prior. After 4 hours on the bike and a fast 30 minute transition run, I returned to the car feeling completely spent. Even the serenity of Medical Lake couldn't distract my mind from taking inventory of what little I had left.

The greater part of Saturday afternoon involved downing bottle after bottle of PhD Nutrition. Flavored and unflavored. Smoothie and drink. I drank it.

Sunday morning presented itself in the way of beautiful sunshine and a calm breeze. I didn't quite know if I'd replenished everything I burned up the day prior, but the short warm up run to the Second Seed starting corral felt relatively good.

We had about 15 minutes before the 9 o'clock starting gun. I looked down at my purple Motion IIIs by Newton, thankful for the way they felt and, in races past, have helped me run faster and more efficiently. I sported my new Big Sexy running singlet for the first time, thankful the day felt warm enough to wear nothing more than that and shorts. 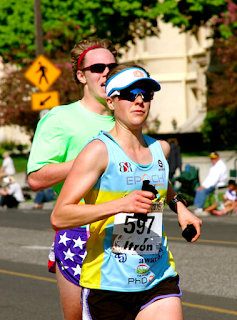 When the gun went off, the mass of people in front of me started to move forward, cuing me to follow. Yet there existed a tremendous amount of people that even starting in Second Seed couldn't help me avoid. My first mile felt slightly labored, perhaps more mentally fatiguing in an effort to weave through other runners. Mile 2 involved a significant downhill, which made it fast. Uphills followed. I've learned to love the hills, thankful for the hill repeats I'd done each week for about a month leading up to this race.

It seemed as though I gained speed and momentum with each person I passed. Three hills down meant I just had Doomsday to scale. I couldn't remember at the time what my hill repeats up Doomsday had taken me in the weeks prior. All I could think about was how much faster I felt I ran compared to the times I'd struggled up it on Thursdays after work.

In years past, I'd learned I always felt my worst in the mile following Doomsday. So imagine my surprise when I saw that my split for mile 6 was faster than that for mile 1! In an instant, I suddenly had fuel, pure motivation, determination, whatEVER, to make me run faster than I ever have at Bloomsday. 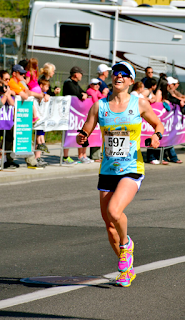 My goal for the last two years has been to run a sub-50 minute Bloomsday. I succeeded this year with a time of 47:49 to place 18th in my age group (behind many women from countries I can't pronounce.)

I sit on the couch, one week later, struggling to balance the triumph of a breakthrough performance with the onset of left piriformis pain that suddenly reared its ugly head on Thursday after an easy run. Of course, my psyche currently feels relatively frail when I consider I'd like to run Bay to Breakers with my family next weekend. Perhaps my biggest concern revolves around the fact Troika is just three weeks away. I can only pray massage, trigger point, and heat calm my throbbing butt cheek.