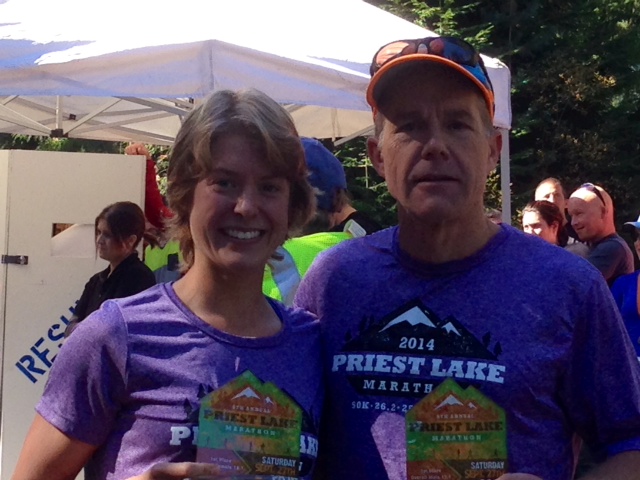 How could one possibly go wrong enjoying a day (or two) on Priest Lake? This must have crossed Ken Eldore's mind years ago when he began building the Priest Lake Multisports events. I first raced the olympic triathlon in 2011, returning just this year to experience yet another stellar day at Hills Resort in Luby Bay. Since then, I've raced the Spring Half Marathon (held in May) and the Priest Lake Half Marathon.

Sorry for the brevity of this post. I wrote up a legitimate race report on both my Priest Lake Olympic Triathlon in August and the Priest Lake Half Marathon last weekend, only to discover upon trying to post it, Blogger failed to save anything past the short paragraph above. I went to bed pissed off, and I'm going to attempt to do justice to two races I feel deserve honorable praise when it comes to cool, scenic events in the Pacific Northwest.

Both courses begin at Hills Resort, so the half marathon actually took place on most, if not all, of the run course for the triathlon. I remember running with my dad to the turnaround, thinking how much more comfortable I felt. However, this half marathon gets hairy at mile 3 where there emerges a long gradual climb that lasts about a mile on rocky fire access road, only to recede slightly before going up a little bit more in mile 4. Once at the top, it's a comfortable downhill back to the gravel road on which we started, so the finish is relatively flat.

What made this event so memorable for me occurred at mile 3. I've always considered my dad a tremendous climber, both on the bike and on his feet. As a result, I've aimed to climb hills with a certain tenacity and determination, not only to keep up with him, but so I can comfortably overtake people on hills.

On this hill, in this third mile, we ate the leaders for breakfast. As a result, dad and I ran together for 5 miles, as the leaders in the male and female divisions. Our conversation consisted simply of heavy breathing and footfalls, yet it felt perfect.

This kind of experience didn't exactly happen a month earlier during my triathlon. In fact, I came out of the water as second place woman and got overtaken by third on the bike. My Quintana Roo looked good, but its rider couldn't seem to get it into high gear. A relatively flat bike ride from Hills Resort past Elkins on Reeder Bay Road, I couldn't figure out why, despite maintaining my power output, I couldn't attain a faster time.

Nevertheless, I pedaled the QRoo back into transition and decided I had two very talented ladies to chase down. Just as my footfalls approached the second place woman, so, too, did a man's footsteps bare down on my dad and I to interrupt our perfect conversation.

Upon feeling threatened, he encouraged me to go. Despite feeling good at the time, he didn't want his calf pain to flare up by attempting to push the pace a little faster. Therefore, while he and our intruder stopped at the aid station for water, I pressed on at a slightly faster clip to run the final 5 miles with a sense of urgency I hate having to use when I know someone is chasing me.

Ironically, though, I used this same urgency to spur my attack on the lead woman whom I needed to chase down to attain the lead a month ago. In that instance, it wasn't enough to win the triathlon. She had distanced herself far ahead of me so I never found enough power to catch her.

Yet in this race, I managed a win. My only reservation was that I won alone. I had visions in those 5 miles of running with dad of running down the finish chute together, father and daughter, winners of the male and female titles.

It turns out, I only had to wait just under two minutes to see my dad barreling down the road toward the finish line, ensuring he'd secured that top finisher status. At that moment, I understood from whom I'd inherited my determination. My heart fluttered. We'd done it. We'd won.

Much thanks to Ken Eldore for another stellar year of racing the Priest Lake Multisports events. Please consider adding some of these races to your calendars next year. You won't leave feeling disappointed or frustrated with what the venue, the volunteers, and the race itself had to offer.