It takes a lot of gumption to wake up to a day designated to test my level of fitness. Last Saturday, I rolled out of bed and wondered how my other TriFusion teammates were preparing for their time to suffe--I mean, "shine." In reality, the day served as a way to establish a baseline of our fitness, and the stakes really weren’t all that high. Well, unless you count the bet Bryan placed on my current percent body fat calculation. (He’s a lucky man that this lady can tolerate jokes about her weight being thrown around so candidly.)

Bryan and I started out the day of fitness testing in Matt Silver’s exercise physiology lab. We walked in the lab around 8:30, greeted by Matt and one of his students he must of bribed to spend the day with us. He also called himself Matt.

After introductions and one last trip to the bathroom, Bryan and I stood on the platform designed to use biological impedance to assess our body compositions. Unfortunately—but not unexpectedly—I had about 7% more body fat than Bryan. Imagine his smile. For me, I have another task for the next two and a half months before Boston: lose a recommended 4.8 pounds to get me down to my ideal body weight. I don’t think that will prove difficult considering my running mileage and intensity will only increase from here on out.

Once the weighty jokes had subsided, Matt-in-charge set Bryan up on his bike while Matt-the-assistant guided me over to the treadmill to begin our tests. We warmed up for about 15 minutes before the commencement of regular blood draws every 3 minutes. For about 30 minutes, Matt increased my running speed by half a mile per hour until my lactate threshold had been found. At 7mph, the concentration of lactic acid was just 2.3mM. By 9.5-10mph, the meter read 4.4mM. Bingo! Just to be safe, Matt-in-charge had me run at 10.5mph for 3 minutes to ensure the last reading was accurate. Thankfully, 6.6mM popped up on the screen, and Matt-the-assistant let me begin to cool down.

As Matt-in-charge explained, a person’s lactate threshold is the point at which the body just begins to lose its capacity to clear lactic acid from the blood as fast as it accumulates. After lactic acid has built up to about 4mM, it begins to accumulate faster than the body can clear it. Therefore, the tests performed by Matt and Matt served to find at what pace, heart rate, and/or power output (for those using their bikes) the lactate threshold was reached. Now, I know at what pace and heart rate I should be training in an effort to increase my lactate threshold, thereby further improving my fitness.

Time did not allow for Bryan and me to test our VO2max, but those who showed up after us had the option to push to an all-out effort to determine theirs. Bryan and I stayed until about 1pm to cheer on others. Perhaps the most fun to be had was during the VO2max testing. It involved a lot of cheering, screaming, clapping, and rooting from us spectators as we watched our teammate pedal or run to complete fatigue. Exhilarating!  …For those of us watching, of course.

I have included pictures taken during the fitness testing, as my Internet connection must be so slow as to not allow me to post them directly to Facebook. Thank you to everyone who came out to participate! We plan on re-testing later in the spring to see how we’ve improved and to better determine at what paces, heart rates, and power we should at when we race our races.

Thank you, Matt Silvers (and assistants) for taking the time out of your Saturday to put us through the works. We appreciate you all tremendously! 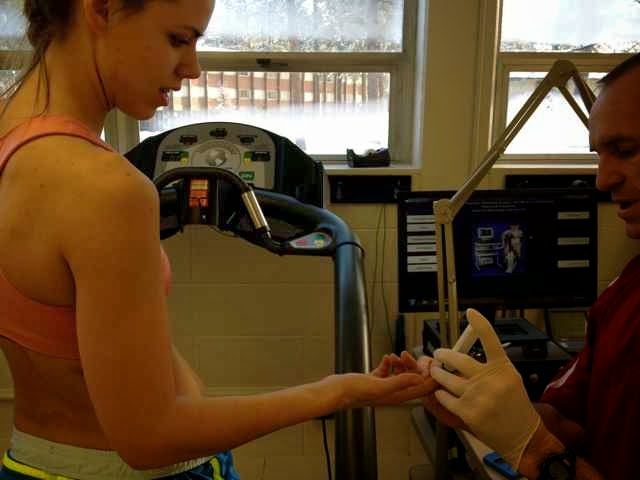