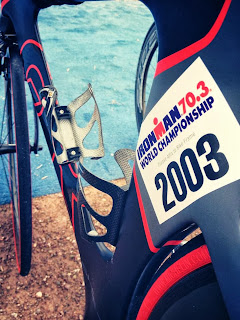 For the better part of this summer, I tried to capitalize on the heat by doing as much running and cycling as I could in the middle of the day. My coworkers and patients thought it ridiculous when I wandered off out in the 90+ degrees for a run over my lunch break. When my coach encouraged me to do my midweek long/tempo runs in the heat of the day, I started to question myself, too. I remember dreading the end of my long day at work, knowing I had to start home but stop near Mead High School first so I could run.

I rode during the hottest parts of the day, too. Having the extra wind against my face certainly helped, but the sun is hard to ignore as it penetrates my skin.

All for a decent race in Las Vegas for the World Championships. I swore I would not succumb to and cripple in the heat like I did last year. I hoped my experience would help me find the finish line in a little better shape. This year, I did.

Bryan and I arrived on Thursday, which gave me a little more time to prepare mentally. As luck would have it, Las Vegas was experiencing some kind of a storm system that provided increased cloud cover and thunderstorms in the afternoon. The only real rain we encountered, however, fell on Saturday when we dropped my bike off in T1. Rain in Vegas?
Race day morning the clouds had opened a little wider, and we walked through a downpour as I made my way to transition to load up my bike with nutrition. Never did I think I'd see rain like this here. It felt great: wet, but warm. Yet I couldn't help but wonder what this would mean for the roadways. I'd never really raced in conditions like this. Exactly how hard could I safely push it on the downhills? Especially with standing water in the roadways. Does hydroplaning happen on a bike?


Just like last year, I found myself in one of the last swim waves to start. Bryan and me waited on the bridge that overlooks the swim start. Puddles of water surrounded us as the roof appeared to have some leaks. When it was finally time to stop watching other competitors start with their waves and begin to don my BlueSeventy swim skin, I could feel the nerves begin to swell in my gut. With his last few words of encouragement, Bryan saw me off as I walked down to my wave of yellow swim caps. Volunteers herded us down to the murky, cloudy, smelly water, and I assumed my position on the far right side of my wave near the red buoy. The gun sounded, and I swam hard to fight for someone else's toes on which to hang for the entire swim.

I found the ramp to the exit of the swim in just over 36 minutes (still, slower than what I wanted even for a non-wetsuit swim). It took me a little over 4 minutes to run around to the other side of the lake, find my transition spot, and then run all the way up out of transition to the road. It's a ridiculous transition. Nonetheless, I made it out and onto the wet roadways. I hadn't ridden more than 2 miles and I'd already passed about $600 worth of sunglasses dropped in the road.

This bike course reminds me so much of St. George's. It is compromised of many medium-length hills of moderate grade. After a significant climb out of T1, you enter Lake Mead National Park. I felt great as I passed plenty of people on my way out and then upon turning around back toward Henderson. It turns out you can go pretty fast even on wet roads (thankfully those without any tight corners), and I don't think I hydroplaned.

By mile 37 of my bike ride, the rain began to dissipate and the sun found its way through the clouds. Sure enough, Las Vegas wasn't going to let me get through this race without suffering from some of its notorious heat first. I could feel the sun start to warm my skin, and by the time I found myself running down the first hill of the run course, I could feel myself begin to sweat. Time for ice! 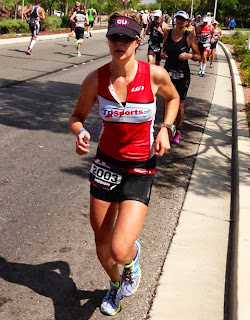 My goal for the run was to never stop running. I had a goal pace in mind and was able to stick to it until mile 3 when, what felt like every muscle in my legs, began to cramp and seize up. I started to walk into the aid station and took down some coke and water. Upon beginning to run again, I realized my legs had settled down and I was back to attempting to maintain my pace. Bryan had told me I'd moved up from 29th out of the water to 17th off the bike in my division. I wondered how many spots I could move up on the run.

By the second lap of the three-loop run, I could begin to feel my pace slow. I willed myself to keep running no matter how much it hurt. Before long, I had reached the final mile of descent to the finish line. Once across, I couldn't help but feel a sense of relief that I'd never have to race this course again. The 96 degrees I experienced on the run didn't compare to last year's 106 degrees, but it was enough to convince me I don't need to come back for a third go-around.

I found Bryan past all the athlete support tents, who told me I'd passed 5 more girls to finish 12th in my division. I felt most pleased with the fact that I'd shaved off 26 minutes from my time last year.

A season is done; a year's hard work of training completed. Upon returning home, I sought out Melinda at Elements Therapeutic Massage for a work over. Now, it's time to make the best use of my offseason! 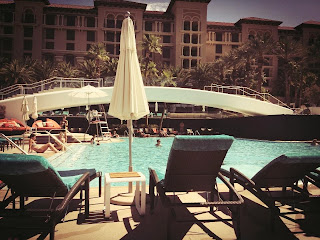