August 24, 2013
Just as I feared, nearly the entire month of August has already passed me by. I sit in Whistler, B.C., which means Ironman Lake Stevens 70.3, the CDA Scenic Challenge Olympic Triathlon, and the CDA Crossing 2.4 mile open water swim have already come and gone. While much has transpired in my racing, an additional boat-load of activity has occurred outside of that arena as well. I've started full- time work as a physical therapist, hired a coach to help guide me through my training endeavors, and continue to train upwards of 12-15 hours a week in preparation for Vegas World Championships.

To say I've felt busy is an understatement. I never thought I'd forgo not one but TWO scheduled massages because of a bike ride that ended up falling on the same afternoon. When I finally made the time to visit Melinda at Elements Massage, I literally melted into the table with relief. My muscles felt so completely entangled due to nearly a month without proper attention, that it took everything I had to tolerate 80 minutes of massage.

Nevertheless, let's briefly look back at each race I've neglected to fully review:

First, Lake Stevens 70.3 looked much better when both eyes had contacts instead of just one. I remember passing the 5mile marker, thinking back to last year, at which time I was still scratching at my eyeball, wishfully thinking that if I could just find my contact, I'd significantly decrease my chances of flying off the road while trying to navigate one of the turns. I never found it because it was still hiding in my swim goggles back in T1.

This year, however, I felt far more comfortable on the bike. The mist in the air caused more trouble for my sunglasses than it did by making the roads wet. In the end, I shaved off exactly 14 minutes from my bike split last year to set me up for a faster run off the bike, too. Even though I managed to run 3 minutes faster than last year to come in under 5 hours (a new PR), I barely missed a top 5 finish by 10 seconds.

In the end, the race felt bittersweet. I'd PR'd my half IM time by over 5 minutes, but I still fell short of an age group podium finish. 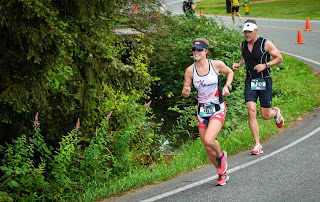 The frustration would continue in my second race, the CDA Scenic Challenge, Olympic Triathlon. I raced back on the bike from a mediocre swim to put me in the top three overall, only to lose my podium finish on the run. While I finished 1st in my age group, I felt most satisfied that I'd finally overcome that tough bike course by beating last year's time by over 4 minutes.

Finally, my summer wouldn't be complete without an open water swim event. Having done this swim last year, I looked forward to another go-around this year. However, once out in the middle of Lake CDA, I realized just how choppy and relentless this lake could be. The water conditions this year made last year's look pristine. Yet the choppy water didn't overshadow the fun event itself. From the ferry ride over to the lounging by the lake with breakfast afterwards, the swim was well worth it. I felt satisfied by a time that mirrored my Ironman pace.

Now, I look outside the window to see it's raining in beautiful Whistler, B.C. I have a 40 minute run and a 3 hour bike ride lined up, both of which Bryan and me plan to do on the IM course. So far, we've felt nothing but admiration for this place. I will likely find myself in line to sign up for next year on Monday. More on that later!