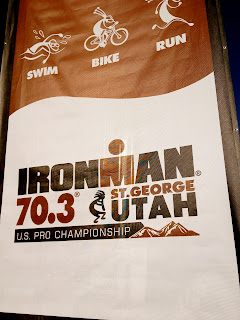 No better way to start off a race weekend than with an early morning swim in cold lake water. The last time I'd struggled into my wetsuit must have been back in late summer. So Ronnie, Bryan, and me took the opportunity to reacquaint ourselves to the neoprene and feel what swimming with added buoyancy is supposed to feel like.

As of yesterday (Thursday), the official temperature provided by Utah State Parks in Sand Hollow Reservoir was 60 degrees. One step off the smooth, red rock into the water made us realize just how unaccustomed we have become to swimming in anything other than the pool. It felt a little colder than 60. We waded out into the water anyway and made for a large rock that turned out to be about 300 yards out in the middle of the reservoir. Tomorrow we'd be swimming around it.

I swam up to the rock only to have something grab at my toes. Upon looking down toward my feet, I watched as several mid-sized fish scurry back under the rock. That is the first time I've ever had anything nibble on me during an open water swim, and I cringe to admit it, but I thought it slightly unnerving. I quickly climbed up onto the rock as Ronnie and Bryan made their way toward me.

After a cold, refreshing swim, we hopped on our bikes and pedaled about 4 miles out on what would be the bike course tomorrow. Scraggly bushes dappled the bright, red sand. The wind must have blown  some of it onto the roadway, surely to be removed by tomorrow's race. We rode out to the first set of cattle guards, which also happened to be the bottom of the first climb. All our bikes felt fine, and just a few minor adjustments were needed. 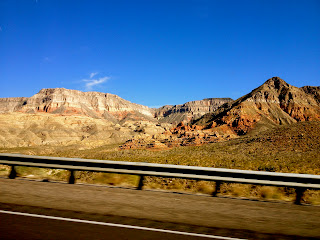 The bike course is as scenic and beautiful as it is challenging, though it presents nothing worse than what we in Spokane ride every day. In fact, we couldn't help but be distracted by the amazing rock structures, some of which whose shapes and formations reminded me of silly putty and cow pies. The bike course will challenge all of us tomorrow, but driving the run course has instilled just a bit more fear than we would like.

The run course? There are about 3 doomsday hills in it. That's all I'm going to say.

Until I say more, it's just about go-time. 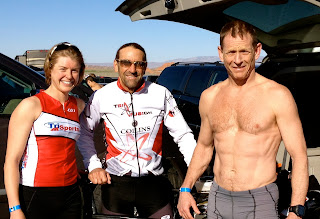