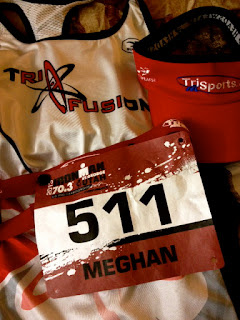 Sitting on the plane, thinking about what I hoped to do this past weekend at Ironman St. George 70.3, I inevitably thought about everything I had working against me:


This race would be a test of my ability to hold back, to walk the fine line between participating and pushing too hard to cause re-injury. This race would be a mental battle with myself; a test to see how well I could stomach sticking to my plan of self-conservation while every other woman passed me. This race would likely leave me disappointed and slightly injured no matter how careful I tried to race.

Then I found a penny. Heads up.

The entire trip to St. George appeared to depend on the flip of my coin. Heads: Ronnie, Bryan, and/or me experienced a strong stroke of luck. Tails: the circumstances didn’t quite play to our favor. The weekend panned out like this:

Tails: All of our flights were delayed at one point or another. Bryan and me received notice at check-in that, due to construction on the Las Vegas runway, our flight that was supposed to leave at 11:40am was delayed by 2 hours. This threw a wrench in our plans when we were to meet Ronnie, who already planned to arrive well before us.

Heads: Our flight’s delay improved from a 2-hour delay to one of just over 30 minutes. We were back on track.

Heads: The bikes made it through security without any damage. (If you’d have seen the amount of pipe insulation Bryan used to shroud his bike, you might have thought it didn’t stand a chance of anything touching it.) The security personnel who inspected them did a decent job of putting everything back into our boxes just as they’d found it. 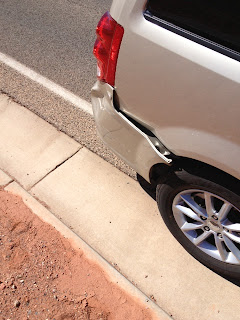 Heads: Ronnie didn’t know that his decision to purchase extra insurance for our rental car would be the best decision of the entire trip. It turned out that, while driving the bike course Friday, a man in a white truck sideswiped our van in an effort to avoid completely rear-ending us. No worries: the bikes sustained no damage. The bike’s riders weren’t injured, either.

Tails: Friday morning’s practice swim in Sand Hollow Reservoir turned out to feel far colder than what any of us predicted.

Heads: Race day morning arrived with clear skies overhead. We felt virtually no breeze to speak of, and mild temperatures further encouraged our pre-race outlook for the day. My feet were pleasantly surprised by what felt like a slight increase in water temperature from the previous day. Upon starting off with the wave of 20-29 year olds, I felt light and buoyant in my Blue Seventy Helix wetsuit. I surprised myself with balls I didn’t think I had when I started out in the front of my wave, kicked it into high gear to avoid the mass commotion in the back, and rallied to find the bubbles of a girl just ahead of the open water I had laid out in front of me. I pursued her the entire swim, sticking like glue to the buoy line, rounding the corners with ease, and pushing it in to the finish. I heard Bryan yell out my name as I flew up the incline to my bike.

Heads: Wetsuit off, socks, shoes, and helmet on, I busted out of transition in just over two minutes as I approached Bryan and Ronnie waving their arms just outside the chute. With a thumbs up and a “Get after it,” I headed out on one of the most scenic, challenging courses I have raced.

Heads: The hills I encountered in this bike ride didn’t bother me. Through all my training, I’ve come to realize I prefer climbing rather than trying to maintain a constant effort on the flats. Each hill presents a challenge of its own, and I usually achieve a significant mental boost by passing young guys on all the hills. This course presents hills of a steadier, gradual variety, epitomized by the final 5-mile climb at an average 5% grade up Snow Canyon.

Heads: A longer climb means a greater opportunity to pass more people. With that excitement, I posted a personal best bike split that beats my previous time by more than 15 minutes.

Heads: I came into transition off the bike after just having busted my butt to pass the leading 25-29 year-old woman ahead of me. Yet she beat me out of transition. I followed her up the first long hill out of downtown at a steady clip that I knew was too fast, but I wanted to gain a little bit more ground on her before I settled into my desired pace.

Heads: I caught up to her, kept up with her, and eventually overtook her by the first mile. My enthusiasm began to slowly build, as my left knee had decided to cooperate and felt great heading into the first major climb at mile three.

Tails: The small muscle spasms in both my quads, just over my kneecap, weren’t ceasing. I pictured myself succumbing to spasms that would leave me hogtied on the side of the road while I watched my competitors zip by me. I also couldn’t stomach racing so well to this point, only to walk/hobble/limp the final 10 miles.

Heads: The Roctane gels I consumed with every chance I had postponed disaster, mile by mile, until I realized I had just three miles left to burn.

Tails: The quick outshoot of an out-and-back before the final mile of downhill finish really sucked. To have finished all the climbing, only to be presented with one last punch to the gut, really didn’t feel fair at the time. My legs noticed, too. The spasms that had stayed confined to my quads suddenly spoke out from my right hamstring and calf. Again, visions of me having to pull off to the side of the road and watch the lead I’d created disappear, flickered through my head.

Heads: I prayed quite possibly my 73rd prayer of the race. I rallied. I flew down the homestretch to the finish line. I crossed it in a time I thought untouchable given the nature of this course. After 5 hours, 2 minutes, and 24 seconds, I smiled, walked over to the fountain in which every little kiddo was playing, and stood with outstretched arms as the water soaked me from head to toe. I felt like I was in the final scene of an action movie. I had conquered one of the hardest courses in the Ironman 70.3 circuit. I further earned the opportunity to compete in another of the hardest courses, Ironman Vegas.

Jackpot: The entire weekend itself. Bryan and Ronnie might possibly be two of the most hilarious travel partners known to man. We gave each other the support we all needed to get through a tough weekend, and we made the most fun out of every opportunity that we had. 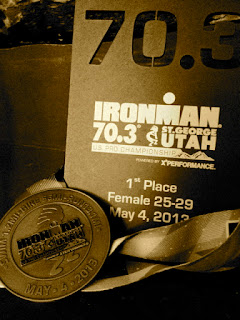 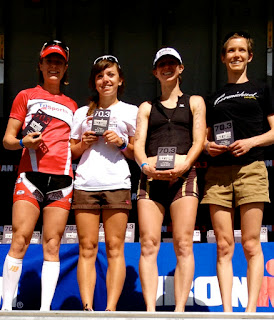 I am grateful to Fitness Fanatics for helping me get all of my bike needs situated in a small window of time. I may have missed out on an opportunity to race my new bike, but I had all the help an athlete could ask for from some of the nicest people so I could be as best suited to race as possible.

Both Therapeutic Associates and Johnson Orthodontics helped fund my way down to race in St. George. Without their contributions, I never would have had the chance to put my training to the test. I look forward to working with them in the future to further represent them and all the great things they do for their clients.

Finally, other athletes from Spokane had phenomenal races, too.