No matter what you call it, SIT or HIT hurts


Training for IM CDA is well underway. The two weeks of rest I set aside after Tri Cities marathon came to an abrupt end when I found myself in Matt Silver's exercise lab with two other devoted friends, Jayne and Bryan, to essentially kill myself for numbers that would represent my Lactate Threshold (LT) and VO2Max. The only problem with finding those numbers is that, once obtained, I only want to improve them.

So began the 2-week endeavor of Wingates on the trainer. Matt Silvers proposed a workout progression that he himself has used in the past and found great success with for his IM training. The three of us followed the same protocol that was outlined in the research study by Burgomaster1, which consisted of six sessions of brief, repeated maximal cycling efforts, performed over 14 days with 1–2 days of recovery between training sessions. In case you'd rather not look through the research study, I'll be happy to provide a summary:

Researchers used 16 subjects (characteristics in Table 1) who were not specifically engaged in training. Half of the subjects underwent the short interval training (SIT), while the other half served as the control group. The main purpose was to determine the effect of SIT performed for 2 weeks on skeletal muscle carbohydrate (CHO) metabolism. Researchers proposed that 2 weeks of SIT would decrease muscle glycogenolysis (conversion of glycogen—the stored form of CHO—to glucose, the form of CHO that is used as a fuel source for energy) and lactate accumulation during exercise, but increase the ability of the body to oxidize CHO during submaximal exercise.

These lucky subjects performed 30-second, all-out efforts, 3 days/week (Monday, Wednesday, and Friday) over the course of 14 days. The number of Wingates increased each day from 4 to 7 for the first 5 days (4 minutes of recovery time between each), and the final session consisted of just 4 intervals.

What researchers found (that most interested us, anyway) was that the 2 weeks of SIT increased muscle glycogen content by 50%, thereby decreasing net muscle glycogenolysis. Lactate accumulation during matched-work exercise also decreased, and time trial performance of the subjects in the training group improved by 9.6%. No change was observed in the control group. In other words, SIT increased the training group's LT, which allowed them to work harder and put forth more power without needing to consume as much muscle glycogen for energy. Bingo.


The first day of Wingates didn't feel nearly as bad when we only had four intervals to kick out. Yet by the second week, attempting to pedal my ass off through a total of seven left me feeling as though I should puke. We all survived those two weeks. I have no idea what my LT looks like now. However, the idea that I'm now training more efficiently with a higher foundation makes me feel more prepared to train at a higher intensity through this winter.

Others have written about their improved results by devoting more time to high intensity, short-interval training. Some argue these kinds of workouts should be reserved for the weeks leading up to a big event, but others (maybe myself included) disagree. Rich Strauss2 wrote a great article on the topic, relying on the motto, "Work is speed entering the body."

Another great research study by Helgerud et. al3 looked at how high-intensity intervals (HIT) improve VO2Max with running. Participants consisted of 40 healthy, moderately-trained male subjects who were assigned to one of four groups:

All four training methods resulted in similar total oxygen consumption, and they were performed 3 days/week for 8 weeks. Researchers found that the high intensity training performed by the 15/15 and 4 x 4 minute groups increased VO2Max significantly (P < 0.001) compared with the LSD and LT groups.3 In addition, researchers observed no significant difference in training response between the 15/15 and the 4 x 4 minute groups.

Perhaps I'm only reiterating what many already know. Yet reading it for myself and applying it to my own training provides reassurance when I sometimes find it difficult to hop on the trainer or drive over to the track each week. So I SIT and I HIT; IM CDA is now less than 200 days away. 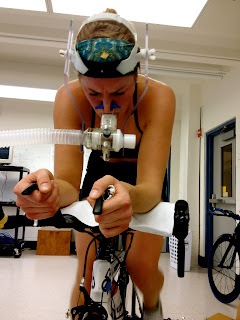 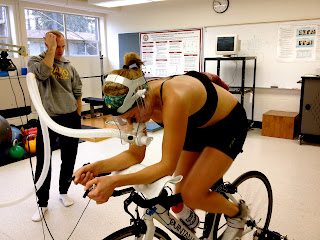