A night of Festivus with The Fucking Bike Club


I sat in my car, having just pulled up alongside a vacant lot in a part of Spokane I’ve never cared to explore. I’ve driven by it before, peering over from the freeway as I made my way west. In the dark it looked far sketchier. Yet the couple of elves that rode by on their bikes seemed to alleviate some of the uncertainty I felt swelling in my chest. So I tumbled out of my car, pulled out my brother’s old mountain bike, and made my way toward The Swamp.

A row of bikes decked out in Christmas lights and ribbons lined the wall of the entrance. Dozens of people loitered outside and inside the dimly lit tavern, enjoying beer and laughter as we all waited for the big send-off. I found my company way in the back. Marjie and Paul are old enough to be my parents who have been longtime family friends from church. Two other younger ladies, whom I knew from church, stood alongside them. Craiger Thorsen showed up around 8:30pm, just about as we started for outside to mount our decorated bikes, a wild assortment of two-wheeled transit I couldn’t even begin to describe.

As people prepared their bikes, Craiger and I couldn’t help but point out all the mysterious decorations. Some made sense, like the Christmas lights wrapped around spokes and bike frames. People wore silly Christmas sweaters and elf hats. One man even toted along a trailer-type contraption that held an old music box. Then the crowd began to flow, and we followed on bikes undecorated.

People living in houses along our route actually came out into the cold to cheer us onward. We tootled around the round-about by The Elk a couple of times, mindful of those who weren’t quite as careful about their bike safety skills. Thankfully, we rolled mostly downhill into downtown Spokane, where we took over the streets. The three to four lanes meant for cars on any other day, any other night, any other time, suddenly transformed into a pathway for members of the Fucking Bike Club as we made our way to the undisclosed bar that was to be our final destination.

All I could think was how utterly ridiculous this all felt. On some random night, well past my bedtime, I’m riding an old bike down the middle of the streets in Spokane. We rode around Riverfront Park’s fountain, which served as the halfway point in our 5-mile route. It soon became quite apparent the importance of a well-fitting bike saddle. In just 15 minutes, my who-ha started to complain. Craiger reminded me I’m only allowed to complain after I’ve ridden 65 miles.

Yet just after passing by Sacred Heart and Deaconess Medical Center, we came upon what looked to be an abandoned house. Finally: our ultimate destination. Bikes locked up outside, Craiger and me walked inside, bought some drinks, and headed back outside to surround the small bonfire. We huddled alongside people I would describe as “sketchy,” as I would have never gone out of my way to meet them had it not been for the odd circumstances.

I experienced a number of “firsts” last night with the FBC. Unless encouraged by friends to do it again, I doubt I’ll ever find myself riding my bike down the streets of downtown Spokane in sub-freezing temperatures, on a poorly-fitting bike saddle, past 9 o’clock in the evening. I have to admit: doing it among friends like Marjie, Paul, and Craiger made my number of “firsts” that much more fun. Perhaps I can enjoy a late night and still make it to Master swim the next morning. Nothing like 4100 yards in the cold pool to wake you up after a crazy night. 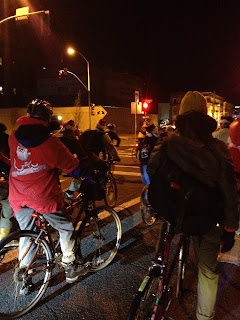 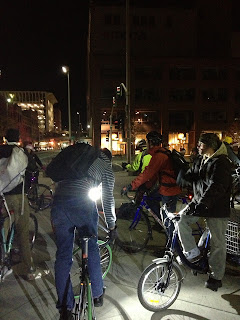