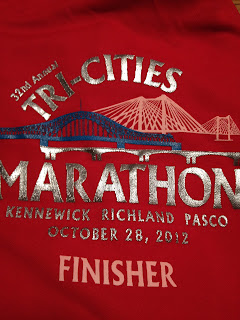 Three years ago this past weekend I escaped Moscow, ID and the rigors of a 20+ credit workload filled with microbiology, anatomy/physiology, and organic chemistry to test my body against 26.2 miles of the Tri Cities Marathon. My parents met me in Colfax and drove me the rest of the way down south so mom could take pictures and dad could guide me the last 13 miles to the finish line.

Circumstances were a little bit different this time around. Though I’d qualified the last time I ran Tri Cities, I didn’t pursue a Boston Marathon appearance in 2010. All I remember on the long car ride back to Moscow was thinking how terrible my body felt and realizing I’d never do this again. The injuries I sustained during the marathon never quite healed until I found myself well into 2010, further encouraging me to stick with half marathons for the remainder of my running career.

Yet three years later, I found myself, once again, in the same crowd of runners, awaiting the beautiful course Miguel Reyna and his crew had prepared for us to explore. Instead of standing alone, Bryan Rowe and Tony DiBartolo stood nearby. Jayne Anderson and David Dennison waited a little further back. I hardly recognized Eric Ewing of Milliseconds Timing hiding behind a growth of facial hair, standing at the starting mat. Before I’d had a chance to finish my prayer, the crowd began to move forward, and the long morning of running had begun.

When you set out to run a marathon, you have a lot of time to yourself to think about anything and everything that might meander in and out of your mind. I couldn’t help but think how we lucked out on a morning shrouded in fog, the sun sure to break through the clouds within the hour. The night before, we’d listened to the downpour through our hotel walls, wondering just how soaked we’d feel the next morning. I had tried to push the thought of running 26 miles soaking wet out of my mind by loading my race belt with GU gels. Strawberry banana, vanilla bean, chocolate outrage, peanut butter, and sublime lime filled my holster that suddenly felt 2 pounds heavier.

The worms brought me back to the race. Bryan’s footsteps kept me on a pace of 7:30min/mile, and it wasn’t until we’d reached mile 4 that the course had guided us off the road and onto the trail that parallels the river. We ran under colorful trees, passed the professional photographer eager to capture the smiles of happy runners before they turned sour at mile 18, and started along the path obviously utilized by geese, too. Not only did I weave my way through worms brought out by last night’s rain, but goose poop made my stride a little lighter and shorter as we clipped onward toward the second bridge.

I could feel our pace slowing once we’d entered the park on the other side of the river. Bryan and I had caught our rabbit (aka Tony), who decided to join us through the park. I remember reaching the halfway point and looking down at my Timex, which read we’d finished the first half in 1:38:10. Yet my pace faltered. We neared the next aid station before crossing the third bridge, and a picture my mom took of my dad and me at this point in the race 3 years ago stood out in my mind. The only significance of the picture—taken from behind us—was that we looked identical: our foot strike, arm swing, and cadence. I had no idea what Bryan, Tony, and me looked like, but it became perfectly clear that my left hip hurt.

The cable bridge marked my ultimate demise. I had held onto the lead woman position, only to have the second woman (now the first) pass me at mile 19. I no longer heard Bryan’s footfalls, as he had pulled out ahead of me. I remember thinking to myself, “Just watch his pace. Keep your legs moving at his speed.” I think that lasted for about 4 miles, until I felt a sharp twinge in my left knee that, unlike in past runs, made me limp.

Frustration set in quickly. Bryan and me had spent the last 6 weeks killing ourselves on the track, running 800s at a pace that would have predicted a 3:15 finish. I would meet him after a long day on my feet each Thursday so we could try to run longer tempos out on Aubrey White Parkway. Those felt worse to me than speed work. Quite frankly, I felt stupid watching both the now-lead-woman and Bryan disappear into the distance. I had only finished mile 25 when my Timex read 3:15, and it wasn’t until I ran the final turn and saw 3:24:00 on the clock that I felt like I’d failed.

The ending is bittersweet. I’d only PR’d by about a minute and 25 seconds, which for me is hardly what I’d originally set out to do. Bryan PR’d by far more. It wasn’t until I saw him near the food table that I realized we’d accomplished what he had set out to do.

Five weeks ago, he asked me, “Why are you running it?”
“To prove (or not prove) I can recover better than last time…so I can feel more confident about racing IM CDA in June.”
Bryan responded, “Not to be mean, but that’s a dumb reason.”
“So what’s yours?”
Bryan: “I have run 6 marathons. I have yet to qualify for Boston. I have always been pretty good at everything I’ve tried to do. However, these endurance things are consistently kicking my ass. I’m a better athlete than my record shows. I need to prove it.”
That’s it. We qualify for Boston. Done.
---

A year of racing, which ultimately led me to compete at the international level: done. Six weeks of continued marathon training with a guy who raced himself to a solid Ironman Canada finish: complete. Finishing the Tri Cities marathon, running ourselves to a Boston 2014 appearance: sweet.

The fact that I failed to reach my goal at Tri Cities seems far less significant when I consider the bigger picture. He did it. Bryan qualified. When I think about my story, I had some breakthroughs this past year, but I did a stellar job of making plenty of mistakes. So goes the story of a 24-year-old athlete trying the fill the shoes of a seasoned competitor. I'm told I have no patience. So I hope the next three weeks of “rest” will set me up for a better 2013. Suddenly, it’s time to start thinking Ironman.