August 12, 2012
An alarm clock that goes off at 4:30 in the morning for the second time in a row could mean several things. It could mean I’m waking up for work, I’m waking up to train, or I’m waking up to race. This morning, however, it meant I’d be jumping in Lake CDA (again) for a 2.4 mile swim. The Longbridge swim two weeks ago left me hungry for another, more successful attempt, at an open water swim. This 2.4 mile endeavor promised to give me just what I needed as I set my sights on Ironman CDA next June. So, just like yesterday morning, I hauled myself out of bed, got dressed, and ate a quick breakfast before meeting Jessi Thompson at our designated time.

We arrived at CDA golf course after a short detour. Apparently, you know you’ve missed your exit when you’re looking down on the place you’re supposed to be from a bridge hundreds of feet in the air. You know you’re in trouble when you see the next exit is 5 miles down the highway. Jessie’s orienteering skills were spot on this morning, as we flipped a quick u-turn to make the appropriate exit, only to find ourselves—once again—heading in the wrong direction. I only hoped this common thread wouldn’t continue as we tried to swim across the lake. Thankfully, we could only swim one direction—straight.

As the boat pulled away from the dock, I felt a little woozy. I’d been sipping on my GU Roctane drink, but decided to pull out the Ginger supplements Rosi Guerrero said she relied upon during some of her longer swims to calm any symptoms of an upset stomach. Jen Polello and I put our wetsuits on, and we soon arrived on Arrow Point to the beat of Good Vibrations by Marky Mark and the Funky Bunch. The National Anthem was sung, and before we had a chance to take one last pee, the cannon marking our departure went off. We started right from the shore, so swimming through the docks to make our way out to the open water proved to be a bit of a scramble. I assumed it only slightly resembled what IM CDA would feel like, so I went along with it and tried to swim like I will 10 months from now. Holy crap…10 months.

My goal for today’s swim revolved around staying calm and relaxed, finishing under an hour, 15 minutes, and keeping Jessi’s feet in my sight. Swimming out of the marina, fighting for position, it soon occurred to me I would have a hard time staying with anyone, let alone recognizing someone’s feet. Yet taking a breath to my right, there she swam, her #348 swim cap just above the water, nearly abreast with mine. She is the stronger swimmer with far more experience than myself. I dropped back and let her take the lead while I hovered around her feet. I bet you never knew your feet were so valuable, did ya, Jessi?

Several people tried to swim in between us, but like I said, no one would get in between those feet and me. Buoys delineated the course. Red buoys signified 2/10s of a mile distance, while the double yellow buoys signified the halfway mark. I skimmed over the water, grateful for the wake Jessi provided and the calm lake water itself. Kayaks and paddle boarders hovered around us, while those spectators who had accompanied us to Arrow Point rode the boat back to the golf course. I never checked our halfway split time, but I felt grateful those buoys appeared sooner than I anticipated. Compared to how I felt at this point at the Longbridge swim, I still had plenty of juice left in my arms. We just kept swimming.

By this time, I could feel another swimmer on my feet, giving me those little “love taps” that signified someone enjoyed my wake. They became pretty frequent, until they disappeared and I found her swimming alongside me. She wanted Jessi’s feet. I let her slip in between us, and we swam it in to the finish.

Standing up, I didn’t have that same queasy feeling I experienced after the Longbridge swim, I could see clearly (my contact still remained in my eye), and a nice lady handed me a popsicle stick with the number 25 and a corresponding time of 1:07 (or something close). Mission accomplished.

Martin Scates and Jen had already finished, so we still had yet to welcome Robin DeRuwe, Janine Fraser, and David Cole across the finish line. The boat upon which we had left all our bags dutifully dropped them back off at the dock. We cleaned up and headed over to our continental breakfast, comprised of fresh fruit, yogurt, bagels, pastries, Starbucks coffee, and juice. It behooved you to swim fast; as it turns out, the food—primarily the pastries—didn’t last long. You could choose from about four different varieties of yogurt (I counted), but I didn’t find a single bagel without a spot of mold (I checked). I opted for the bran muffin, while Martin chose the pastry.

All in all, I thought this inaugural event has promise to transform into an annual affair. The volunteers made the experience enjoyable, and the atmosphere felt inviting. The giveaways at the end were worth sticking around for, as several gift certificates, wine, massages, baskets, a one-night stay at the CDA Resort, and a nice looking beach cruiser bike—which Jen found herself taking home—were raffled away. My only recommendation for next year would be to lower the entry fee to attract more participants, make packet pick up available race-day morning to accommodate out-of-town racers, and freshen up the continental breakfast with something far better than moldy bagels. I look forward to next year, and I hope you’ll consider it, too. 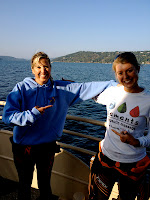 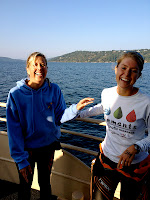 Jen and me attempting to make Kari feel guilty she didn't join us today. We missed you, Kari!