When the opportunity presents itself to run a turkey trot the morning of Thanksgiving, most of the people I know would gladly run 3 to 6 miles in order to create some kind of calorie deficit to make up for what we athletes call a true "feast." In addition, I find these runs or races allow for conversation and time spent with friends and family in an atmosphere filled with warm bodies, ridiculous costumes, and warm drinks afterward.

For as long as I can remember, the Manito Turkey trot organized by the Bloomsday Road Runners Club served as my turkey trot to spend time running with my dad. We'd drive up to Manito park and wait in our well-heated car until just about 15 minutes before the start because stepping out into the sub-freezing temperatures served as the greatest challenge of the run itself. Once the run began, we warmed up quickly and often ran the 5k course twice through (we're big eaters at our Thanksgiving table).

This year, I had the chance to get away from school and visit family and friends in Oakland, California. the Brazen Racing running club (http://www.brazenracing.com/) put on two great races I had the privilege to compete in with Steve Anderson, another successful triathlete who recently moved to California this past April to work for GU Energy Labs.

Both the Nitro Turkey Trot, comprised of both 5k and 10k courses around Point Pinole in San Pablo, and the Quarry Turkey Trot, including all 5k, 10k, and half marathon courses in Fremont, made up the greater Double Turkey Challenge. Both being competitive people, Steve and I ran both 10k courses of the two races, one of which was held Thanksgiving morning--obviously to make up for what would be consumed later that day--and the following Saturday morning--presumably to make extra certain that what wasn't burned off Thursday and Friday would definitely be taken care of Saturday. 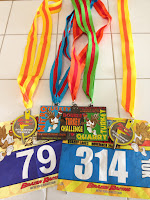 All participants received finisher medals at both races, and if you competed in both, a third medal was handed out on Saturday to link the two race medals together, as shown to the right. I thought it was a clever idea to make running two turkey trots a little more exciting. We both felt incredibly sore after pushing ourselves Thursday morning to top age group finishes. We weren't sure how our placings would compare on Saturday, but somehow we both finished the same way in our age groups at the second race as well. All in all, we each brought home some significant hardware, nearly 3 pounds of extra weight to add to my luggage for the trek home. 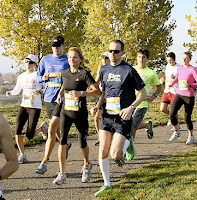 There is something to be said for racing in new areas with different competition. Going down to the big sunny state, I was not sure how my performance would stack up to the runners there. Looking back, it hardly mattered. Sure, I placed well given the amount of training I had put in coming off a big race season and having spent about a month enjoying the unstructured off season. Yet I realized spending time with good company and running alongside a fun and competitive person made this running/racing experience so much more enjoyable. (You'll have to ask Steve for his personal account of the races as a whole. I'm not yet convinced he enjoyed them as much as I did.)

A big thanks to Brazen Racing for putting on two great events. I hope to plan future visits to Oakland around events like these, as they make for great opportunities to sightsee and enjoy some California sun. Until then, I've got a Spokane winter to train through...