For those of you who question the sanity and common sense of those who chase moose, let me reassure you the Wild Moose Chase is not quite what you might imagine. Yes, running on the mountain, traversing hilly terrain, and side-stepping rocks and roots is involved. Yet the only moose spotted at the inaugural Wild Moose Chase trail run was by me, the race director. I’m not kidding. I didn’t have the privilege of racing this event, but I did have the opportunity to stand in as race director with two other ladies from my Doctor of Physical Therapy program at Eastern Washington University. And lo and behold, while setting up the 10k course, banking a turn to continue onto the Wild Moose Nordic trail, two bull moose stared at us in my Toyota 4-Runner. Apparently they got my invitation!
I’ve always been one to run the races, to shoot for that age group award, to relish the satisfaction of a well paced, well raced event. Not this time. When it came time to start raising money to cover some of the travel expenses my class would incur to attend a national educational conference this coming February, they turned to Haley Cooper-Scott and me to organize some kind of a race. We looked at each other with skepticism, shrugged our shoulders, and thought, “Shoot. Why not?” The problem was, neither of us had actually directed a race; we’d always been the ones competing.
Nonetheless, we each had our own set of contacts to learn what we needed to know to put on a race. It soon transpired that a trail run would attract the greatest number of people given the rising interest in local runners to get off the roads and out onto the trails. Both familiar with Mt. Spokane through our own running and skiing on the Nordic trails, we set that as our location and soon decided upon a name: The Wild Moose Chase Trail Run. 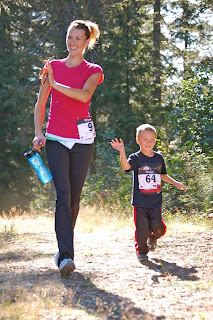 With some organization, a lot of planning, and tremendous support from our sponsors, Saturday, September 24th rolled around faster than any of us anticipated. My class was just coming back from a 5-week internship to round out our first year of school, and many of the details had to be worked out without their help. Steve Christensen, the park manager, provided such great support and enthusiasm for our event, and he did much of the course preparation. An avid runner himself, he took the time to create the 25km course that so many racers cursed by the end of the day on Saturday.
What a rush! The 25km course started out by 9am and the other two races were soon to follow. I don’t think I sat down until the first 5km runners crossed the finish line. It wasn’t until 11 o’clock that I finally had a brief 10 seconds to use the bathroom, and don’t ask how that went down…
Runners crossed the finish line, proud of the courses they conquered and the scenery they witnessed. As far as I know, racers never wandered off course, and no one suffered from any serious injuries that day. However, I still feel terrible about overlooking the importance of having a couple coolers of ice for those who needed an extra boost to ameliorate any aches or pains incurred along the way. Runners admitted the 25km course that Steve and Haley worked on proved to present quite a challenge to roadrunners and avid trail runners alike. One man commented that it wasn’t quite challenging enough to separate the trail runners from the roadrunners. However, I don’t think we have any plans to make it more difficult next year. We would rather see some PRs! 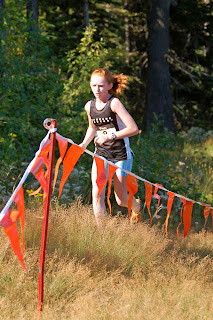 The 5km and 10km courses looked much flatter on paper than they did in actuality. I ran both courses the week before the race to ensure race distances were somewhat accurate. I applaud all the 5km runners for finishing a truly hilly, challenging course. It certainly kicked my butt! Avid runners and families with kids all turned out to enjoy the courses, and when I had the chance to watch runners cross the line, I saw only happy faces.
For those who participated this year, thank you for turning out to support our fundraising effort. We ended up raising over $7,000 to help get us to Chicago, IL next February for the Combined Sections Meeting, an educational weekend for physical therapists and students alike. Next year, we hope to help the upcoming physical therapy students raise money by putting on the race again. We all had so much fun and saw so many areas in need of improvement; we thought we better try it again to see if we can make the event even better. I hope you will consider turning out next year and spread the word to those you think might enjoy a day on the mountain.